Some 2020 highlights, from Nuremberg to the Rhineland and many interesting places and things inbetween.

New Year | Besides the new year celebrations with friends and colleagues in Ditzingen, for which each guest was given an origami bird and a handwritten haiku, January was a quiet month. 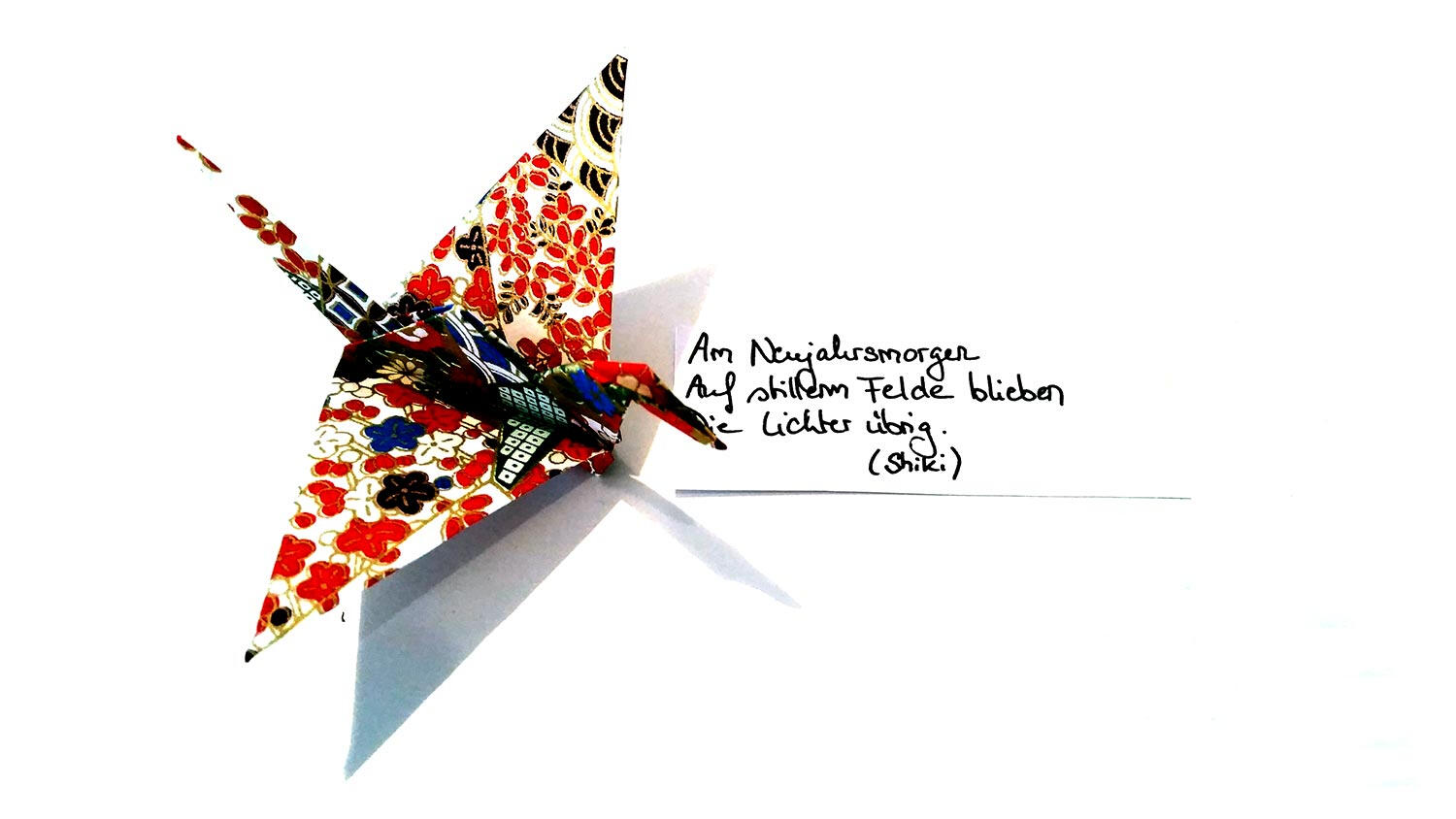 Click to enlarge | February's highlight was a visit to Nuremberg and, amongst other sites, its infamous former Nazi Party Rally Grounds. We also ate some typical local dishes, like the "Franconian Duck" [German] or enjoyed a lovely "Gimlet" or two at our hotel's bar.

Click to enlarge | In March, with its unusually warm weather, which allowed us to spend a lot of time outside, we were hit by the coronavirus lockdown. So, we upgraded our cutting boards to pro versions, my desktop speakers to excellent sound ... and concentrated on eating healthily.

Click to enlarge | As the lockdown continued, we were first confronted with "The Great German Toilet Paper Crisis of 2020" and needed to order toilet paper online. The rest of this second lockdown month was spent upgrading digital work equipment, having great breakfasts (and the occasional drink) outside in the spectacularly good weather, preparing healthy food and trying new recipes. As much as it was permitted, and because there's nature all around my place, we took extended walks and even collected wild garlic to make our own pesto.

Click to enlarge | For my better half, the lockdown was coming to an end, but for me, a high-risk patient, home-office work continued. Still, we managed to spend a lot of time on creating great & healthy food for ourselves, I rediscovered gin, which had been the poison of my youth, and the spectacular and seemingly never-ending warm weather allowed us to enjoy a good drink outside now and then as well as a tour or two around the "Palatinate". As I have said before, we live in an area most people in my country pay lots of money on to vacation in.

Click to enlarge | June - with its spectacularly warm weather - was mostly spent at home, on the balcony (with plenty of home office work). Besides continuing our excursion into new and (mostly) healthy recipes (including a hefty portion of "Köttbullar" after IKEA published their recipe), we managed to visit one of our favorite wine haunts in Landau, just north of here, which was all roped-in because of the pandemic. Still, we left with a healthy load of excellent wines, especially "Chardonnay Rosengarten" by Bernhard Koch, a winemaker from Hainfeld, a town which also houses another favorite of ours, "Borell Diehl".

Click to enlarge | July was the month I signed up for my next Mars Mission (Curiosity Rover/2011, Insight/2015, Perseverance/2020, Future Mars Mission/2020) and added to my substantial frequent flyer miles, which are at 1,714,810,630 points as I'm writing this. Down on earth, I upgraded my main device needed for my home office work to a spec'd-out 2020 Dell XPS 17. July's highlight was a trip to "Kappelrodeck" in the neighbouring state to visit Scheibel's distillery and the spectacular surroundings, including a wonderful lunch at "Rebstock Waldulm", a Gault Millau recommendation.

Click to enlarge | August was just about the busiest month of 2020. Working in two different states, we barely had two weeks of holidays together, all of which we spent visiting my parents in Bonn, spending a few days at a splendid hotel there ("Boutique Hotel Dreesen", a Trip Advisor winner) and then retreating to a wonderful small town near Bonn, Unkel, just along the Rhine river, for nearly a full week of relaxation in blistering heat at another fabulolus hotel, "Rheinhotel Schulz". I also celebrated my birthday, followed by a great dinner at a restaurant near my place, which I had never previously heard of: "Hotel zum Riesen" in Kandel.

Click to enlarge | September continued with spectacular weather (continuously since March without interruption) and we spent a lot of time outside, in our harbour nearby and along the Rhine, enjoying nature, which surrounds us everywhere. We also made our first "Wiener Schnitzel" (made with clarified butter and quite tricky!), which might not have looked perfect but tasted excellent (pretty damn good for a first attempt), and my better half celebrated her birthday at the end of the month. Her "official" birthday dinner followed in October.

Click to enlarge | My better half's birthday at the end of September was celebrated both in Ditzingen with her colleagues and here, in Wörth, at our place, and we managed to go out for a nice (late birthday) dinner right in the middle of a serious coronavirus lockdown (with all the distancing rules in place, etc.). Besides that, we made some really good dinners (spectacular meat dishes plus a copy of a gorgonzola-pear dish we had eaten a few weeks before in Bonn) and enjoyed the still brilliant weather outside, taking our new Canon EOS M50 camera for a spin.

Click to enlarge | In the beginning of November, it was still 21 degrees (Centigrade) outside for a while and, as it turns out, the year was one of the warmest of the century. But, as soon as it started getting cooler, foggier and altogether more unpleasant, the Christmas cookie production was started.

Click to enlarge | With a new lockdown in place, we simply decided to make our life as cozy as possible and enjoyed the colors (decorations), smells (baking & cooking) and sounds (plenty of good music) of Christmas. In the beginning of December, we still enjoyed absolutely spectacular sunsets (it really did look like that, plus 5% of red that my smartphone added), whereas at the end of the month, when we visited my parents for one day on my dad's birthday just after Christmas, we had to drive home in a snowstorm. Besides all of that, we could again confirm that a lockdown isn't really that bad if you spend some time decorating nicely, spending time with a slew of old & new Advent calendars, puzzling, trying your hand at new recipes (or perfecting old ones) and enjoying some fine beverages to rekindle memories of the past.